Tool change commands are generally very easy, simple, but yet can be very confusing.

To do a tool change, we simply need a T command and an M6 command.

A T command is basically where you tell the system the tool number that you want to load.

So for example, if you would like to load tool number 3, we will first put in T3, so we’re telling the system that we need tool 3. Then we put in M6, it means change the tool now!. In some controllers, you can actually give the M6 command first and the T command later. But overall it can have a very different effect on how the tool is loaded.

So you might think that if you need to change tool 3 as in this example, we can give T3 M6 or we can give M6 and T3. But in reality, these are two different commands. The way they are executed inside the controller makes a huge difference on how we actually put the T or the M6 command first. 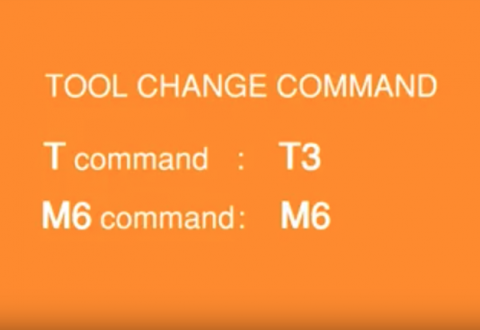 To be able to understand the reason why it affects and how it works, let’s first look at some different types of tool changes. The tool change command was designed keeping in mind that some bigger machines can have a lot tools in the tool changer and it can take a long time for the tools to be loaded. So if we look at this type of tool changer, by the time we give it a command to go and load a tool, it takes a long time. 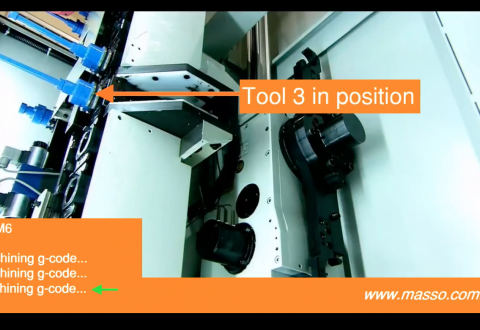 Imagine if you’re running a production job and you need to do a lot of tool changes. You’re wasting a lot of time every time you’re going there, picking up the tool, and coming back. To save time, when we initially start the program, that’s when we have to give the T2 M6 to start off with tool number 2. So we’ll start machining with this tool. But down the track, we will need tool number 3.

Rather than first finishing the machining cycle with tool number 2, then going and fetching tool number 3, we can actually give another command in the very next line as T3, but we don’t put the M6 command here yet.

So what’s going to happen is, while the controller is still machining, the tool changer is actually bringing tool number 3 into position and sitting there for the right time.

Let’s create a quick gcode program to see how the tool change command order will impact machining operations. Please watch the below video:

I hope this documentation has helped you in your tool change commands. Feel free to check more of our cnc documentations in our website or connect with me on Linkedin to see what MASSO is up to next!

Orders received after 17th Dec 2021 will be procesed and dispatched in the second week of Jan 2022.